Mamie Till-Mobley was born in Tallahatchie County, Mississippi. Shortly after she was born, her family moved from the Mississippi Delta to Summit, Illinois—just outside of Chicago. They were part of what has later become known as the Great Migration—the decades-long mass movement of millions of Black Americans from the Jim Crow South to the urban Northeast, Midwest, and West. Emmett was born in Chicago in 1941.

Family members recall Emmett as a happy child. He helped around the house. He liked jokes. And he liked playing jokes on other people. In their free time, he would play baseball with his cousins.

Emmett Till was just a regular kid.

When he was 14 years old, Emmett joined his cousin, Wheeler Parker, on a trip to the Mississippi Delta to stay with Mamie’s Uncle Moses Wright. Before he boarded the train, Mamie warned her son that Mississippi and Chicago were two different worlds, and that he should remember that things were different in the Jim Crow South. Emmett assured her that he understood.

And she hugged her son goodbye for the last time. 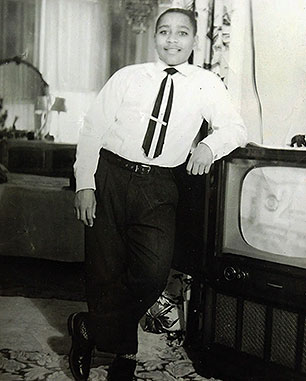 Emmett at home in Chicago.
Photo credit: Till Family 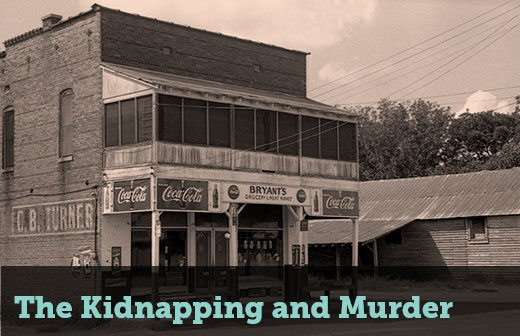 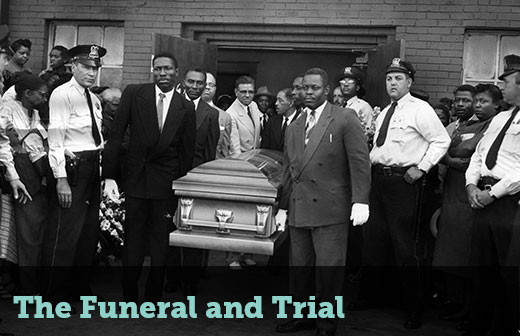 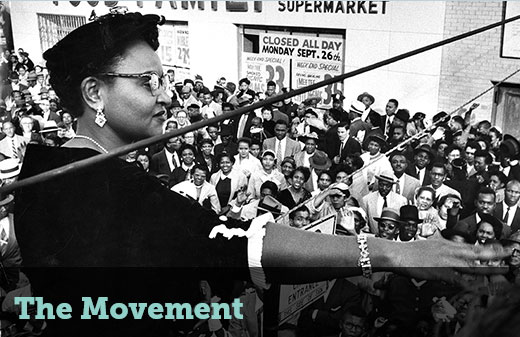 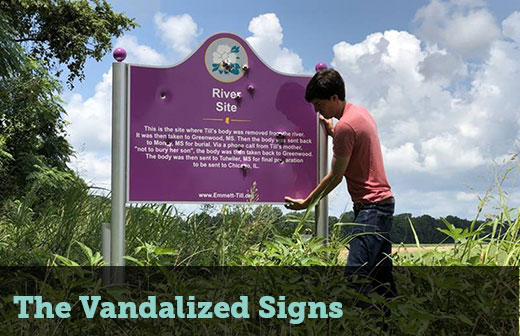 The Kidnapping and Murder

On the evening of Aug. 24, 1955, Emmett joined his cousins and friends in visiting Bryant’s Grocery & Meat Market in Money, Mississippi. The boys enjoyed playing checkers on the store’s front porch. They took turns going into the store to make their purchases. Shortly after they left the store, Carolyn Bryant—the grocery’s shopkeeper—walked to her car.

When shopkeeper Carolyn Bryant came outside, Emmett whistled at her.

Even though Emmett was just a child, his cousins knew that a young Black man whistling at a White woman was a violation of the unwritten rules of the Jim Crow South. They made a beeline for the car and drove away as quickly as they could.

They did not tell anyone at home about the event. Days passed. Nothing happened. Emmett and his cousins forgot about the whole thing. Others, however, remembered.

At 2 a.m. on Aug. 28, 1955, Carolyn Bryant’s husband Roy and his brother J.W. Milam arrived at Moses Wright’s home and abducted Emmett Till. They took him to a barn where they, along with several accomplices, tortured him and ultimately murdered him. Then they used barbed wire to attach a heavy cotton gin fan to his body and dumped Emmett’s body in the Tallahatchie River. 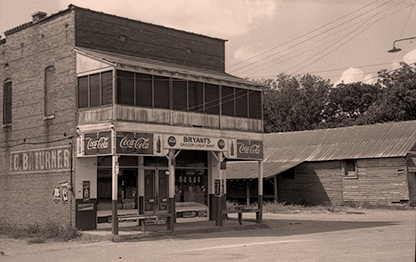 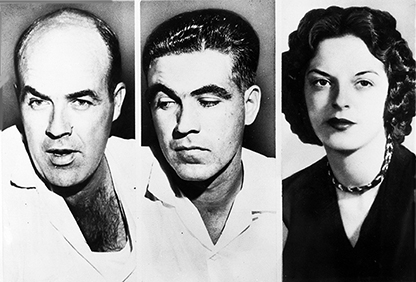 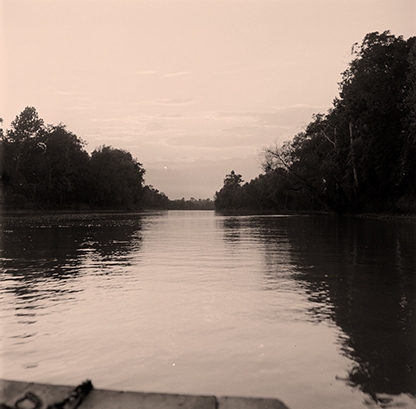 Tallahatchie River near location where Emmett’s body was found

The Funeral and Trial

Local officials tried to cover up the incident. Upon the discovery of Emmett’s body, the sheriff ordered that he be buried before sundown. Word reached Chicago and Mamie demanded that her son be returned home. Officials complied and sealed Emmett’s body in a casket with the order that it could not be opened.

When Emmett's body arrived in Chicago, Mamie demanded that the funeral director disregard Mississippi's order. "Let the world see what they did to my boy," she said.

The people did see.

Emmett’s body was displayed in a glass-topped casket. Over several days, 100,000 (or more) people arrived at Roberts Temple Church of God in Christ to pay their respects. Jet magazine and other Black media publications published the gruesome photos of Emmett Till’s barely recognizable body.

A few weeks later, the nation’s eyes turned to the Tallahatchie Courthouse in Sumner, Mississippi. Bryant and Milam were put on trial for the kidnapping and murder of Emmett Till. The proceedings lasted five days. The all-White, all-male jury took just over an hour to reach a verdict—not guilty.

This miscarriage of justice was put on display for the entire world to see, and it fueled a movement that changed the course of the United States. 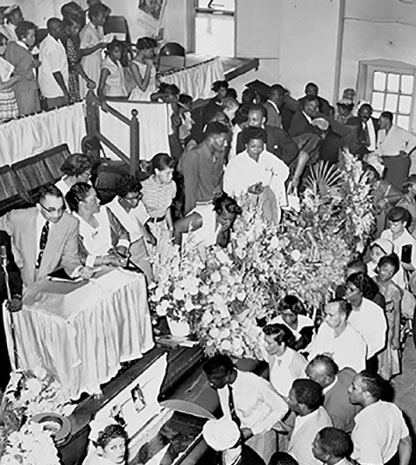 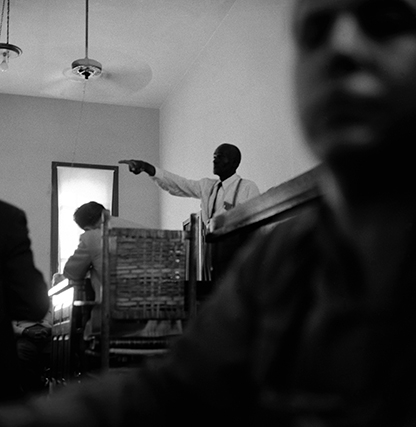 “I thought of Emmett Till, and when the bus driver ordered me to move to the back, I just couldn’t move.”—Rosa Parks, as quoted by Rev. Jesse Jackson

Mamie Till-Mobley would not allow her son’s murder to have happened in vain. So she spoke out. She helped shine the light on the injustice that existed in the Jim Crow South. Sharing her son’s story helped spur others to action.

On Dec. 1, 1955, just a few short months after the verdict in the small courthouse in rural Mississippi, Rosa Parks was arrested in Montgomery, Alabama. Her crime? Refusing to give up her seat to White passengers who were boarding the city bus.

This fueled a social revolution in the Jim Crow South.

“I have wanted Emmett’s name to stand for healing, reconciliation, forgiveness, and hope.”—Mamie Till-Mobley 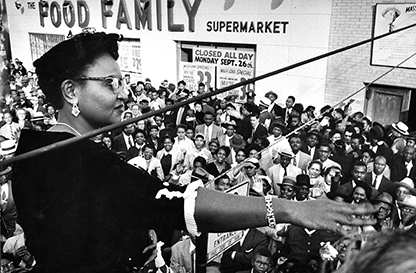 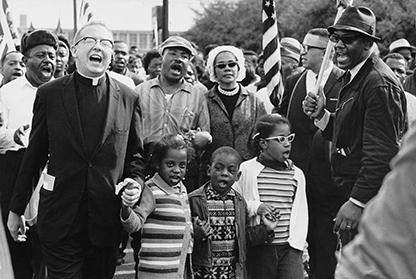 The story of the brutal murder of a 14-year-old child fueled the fire that helped change our nation. And the legacy continues. But a challenge remains.

Historical markers recalling atrocities of the Jim Crow Era have been placed throughout the Mississippi Delta region. They help preserve Emmett’s legacy—and continue to point us towards reconciliation, forgiveness, and hope as we look back at this terrible moment in history and say, “We cannot allow this to happen ever again.”

One of the markers, however, has gathered attention from those who have little interest in working toward change. The sign that is near where Emmett Till’s body was found has been vandalized repeatedly. Each time, the sign has been replaced by folks striving to preserve the memory of Emmett Till. One bullet-ridden sign is part of the Emmett Till & Mamie Till-Mobley: Let the World See touring exhibit. It is a powerful reminder that while Emmett’s story helped fuel a social revolution, there is much work that still needs to be done.

Racial reconciliation begins with telling the truth. We must continue to share Emmett’s and Mamie’s story. 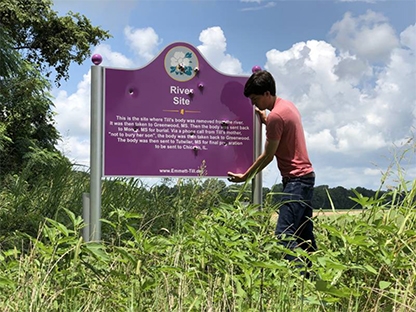 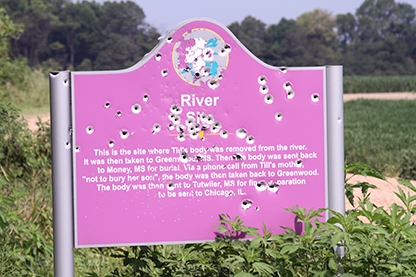